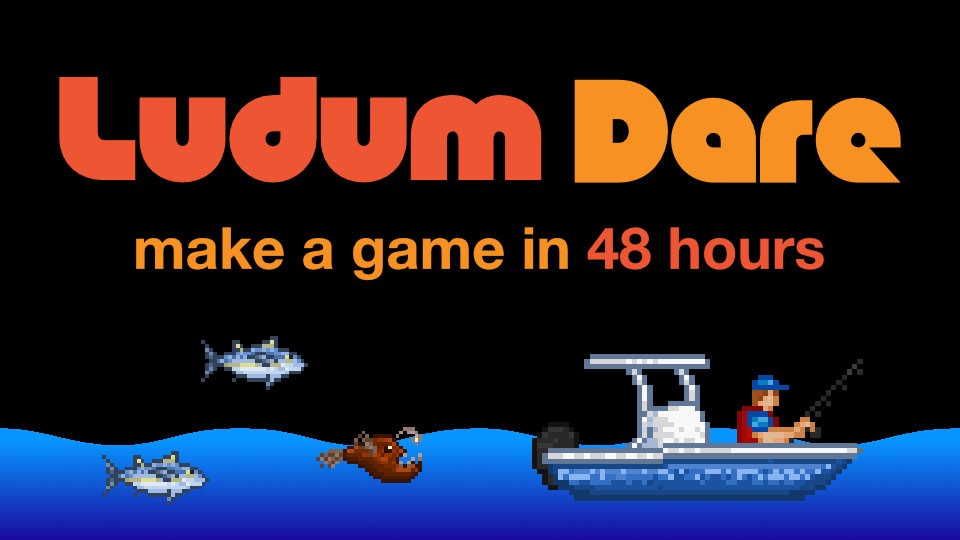 About the Ludum Dare Game Jam

As many game developers are aware, it can take a significant amount of time to develop a video game. Most commonly it takes years' worth of dedication to develop a single commercial game on your own, which is why creating a game over a weekend can seem like an impossible task. However, every year, thousands of game developers have proven to be able to create stunning, inspirational and enjoyable games in under 48-72 hours for the online game jam event known as Ludum Dare.

This year's event was special because it was Ludum Dare's 48th event since 2002 and I was determined to submit a game that was developed in 48 hours by myself with no previously created assets. The rest of this article goes over my experience with that and what I produced by the end of the intense 48-hour development sprint!

If you would prefer to just play my game right away, head on over to its itch.io page and download the game from there.

I knew I had to keep my project scope and game asset requirements to a minimum to produce a polished game in time for the 48-hour deadline. Ironically, one of the notable ways I accomplished this was developing a game for a console that has limited computing power, has long since had its run and had a large chunk of its development resources lost to time. That console is, the Nintendo DS!

Fortunately, during the DS's hay day I was actively learning how to create games for it using the homebrew development app DS Game Maker (DSGM). And I'm even more fortunate that as of 2020, DSGM has been made available for free and usable on modern consoles by its original developer. You can check out the DSGM Fan Site if you're interested in trying out the software yourself. Ergo, seeing how I had a few years of experience with the software and wanted to make a simple 2D game; developing one for the DS was a no-brainer.

DS Game Maker restricts me to the DS's limitations and so it helped me to decide on appropriate sprite sizes, number of background layers and more design decisions for my game. As well, the DS's constant resolution and frame rate saved me from having to code my game to play consistently for different screen sizes and frame rates. And ultimately, developing for the DS's limitations as opposed to those of a PC prevented me from being overly ambitious with a large project scope while still creating something that would be regarded as a noteworthy accomplishment.

Developing For This Year's Theme

For every Ludum Dare event, a theme is voted on that every solo developer and team must do their best to create a game for. From overhearing theme discussions of other developers in the discord server I was attending, it seems most theme suggestions that entail a game's setting or story elements are considered too restrictive and are not likely to make it to the final theme voting round. This however, doesn't stop others from submitting theme suggestions that specifically relate to a game or aspects of a game they want to make (admittedly myself included). In the end, this year's game theme ended up being "Deeper and Deeper" which as you may imagine can be interpreted in many different ways. So much so, that from after seeing everyone's different games, I then saw how great and versatile of a theme it was.

For my game to embody the theme of "deepness", I took heavy inspiration from a certain fishing minigame I played as a kid on my Game Boy Advance. You might even know which one it is based on how my game plays, but I'll leave that to you to guess which one so inspired me. I titled my game "Fishing the Deep" and the goal of it is to collect as many points as you can within a time limit by fishing fish from the lowest depths of the ocean.

Given the simplicity of my game and what I'm able to accomplish on my own, I knew I would complete something by the end of the 48-hour deadline; I just didn't anticipate spending so much time on the smallest details of the game. My biggest challenge was having the fishing hook and its caught fish move seamlessly from the DS's bottom screen to the Top upon being reeled-in. In reality, the DS's screens act almost like separate game levels and so instead of directly moving an object from one screen to another, I have to delete an object from the bottom screen and then re-create it on the top. This wasn't too complicated until I wanted to make it so when the hook has been hoisted onto the top screen, the player no longer has control over it and it falls down on its own. Without going into too much depth (no pun intended) on why this became such a struggle, I can say that the final hook reel-in and fall to the bottom screen behaviour resulted in almost half a day's work.

Setbacks aside, in the last 8 hours I had to replace all the rough prototype artwork with my own that I had yet to create. Unfortunately, I didn't have time to design and animate as many catchable sea creatures as I wanted to, nor was I able to edit the rest of my 5 minutes or longer musical score. So instead I finished the game, with two different fish species and a short but pleasant musical score.

The Playing and Rating of Everyone's Games

While Ludum Dare isn't a competitive event, it is one where everyone is encouraged to play, rate, and provide feedback on each other's games. This is where I was delighted to hear others were generally happy with my game's presentation and polish, but also a little glum to have released a game that with more time or fewer setbacks could have had so much more to show and do.

Regardless, I'm sure I can expand on the game someday if the opportunity arises and potentially make a sequel that has everything I wanted the original to have along with implementing all the good feedback I received.

In the end, I learned a lot about what can be reasonably accomplished in 48 hours and what to watch out for in my next game jam, so I certainly hope my next 48-hour-made game will be even better!